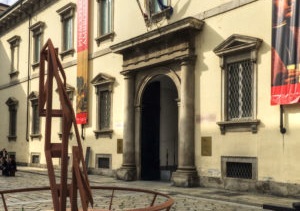 The Pinacoteca Ambrosiana is inside the Palace of the Ambrosiana in Piazza Pio XI, 2, right in the center of Milan, the Duomo stop MM.

In the early seventeenth century inside the Palace, Cardinal Federico Borromeo wished to found a great library. In 1618, after an expansion of the buildings, the cardinal decided to donate the Ambrosiana also its extensive collection of paintings and drawings. The collection, consisting primarily of works of the masters of the 16th century, formed the nucleus of what would become one of the most important art galleries around the world. In 1625 he was also opened the first Academy of Milan.

Between the 17th and 18th centuries the collection of the Ambrosiana grew further, until arriving in the 19th century for a further extension of the structure.
To date the picture gallery consists of twenty-four rooms in which you can see some of the greatest masterpieces of art history. Among others there are:

In addition to works by Italian authors you can also admire a rich collection of Flemish paintings. Inside the Gallery exposes sheets of Leonardo da Vinci’s Atlantic Codex. For information on timetables and fares visit the website http://www.ambrosiana.eu/

This website uses cookies to improve your experience while you navigate through the website. Out of these, the cookies that are categorized as necessary are stored on your browser as they are essential for the working of basic functionalities of the website. We also use third-party cookies that help us analyze and understand how you use this website. These cookies will be stored in your browser only with your consent. You also have the option to opt-out of these cookies. But opting out of some of these cookies may affect your browsing experience.
SAVE & ACCEPT
Powered by